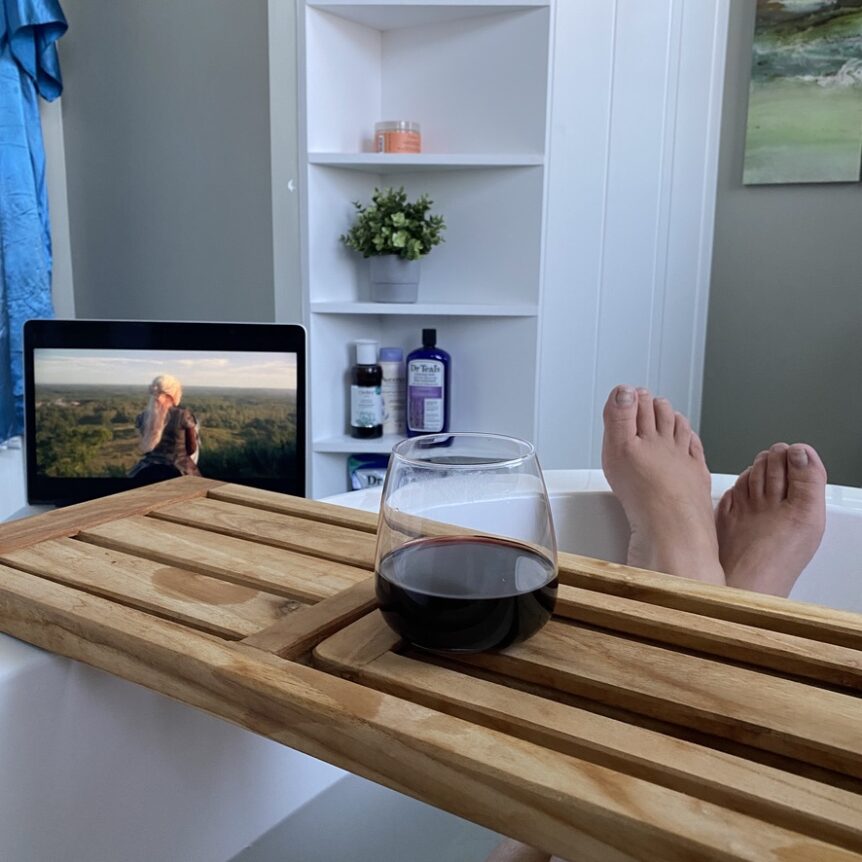 Last month, Kev and I became almost-empty-nesters.  Nature has a particular, and maybe wise and organic, way of dealing with any impending feelings of empty nest syndrome.  There are 7 people that live in our house.  We have our 4 children, Molly (19), Domenic (18), Hugo (17), Sophie (15), and our roommate.  7 people that to look at you would think are adults.  They all eat like adults, are the size of adults and of those 7, a few of us behave like adults.  Everyone was home for the summer.  This means lots of dirty laundry left everywhere (dining room table, bathtub, every horizontal surface of the house), so many shoes at the door, cooking like you’re having a dinner party multiple meals everyday of the week, and the dishes and cleanup that goes with that.  Some of you will feel this when I say…the freakin’ scrambled egg pans. I hate scrambled eggs now, if only for this reason.

This summer we had a few occassions that required us to leave the kids on their own, in charge of the household.  Each time we came back, we were greeted by a new form, and level, of disgust.

The first time we were both gone, I went away for 4 nights to see Kev partway through his 3 week work/play trip away from home in July.  When I returned I was greeted by the usual dishes in the sink, recycling and garbage overflowing and dog hair blowing through the house like tumbleweeds.  The gem of this particular return was the dripping garbage bag of empty (or mostly empty) beer cans that my son, in his earnest effort to clean up after his party, had left in my beautiful stand-alone bathtub.  I hate beer.  I hate the taste of it, no matter what they try to adulterate it with and I hate the smell of it.  After this particular find, I can confidently say that I, sure as shit, hate the smell of days-old-in-my-bathtub beer.

The second time, Kev and I were called to a funeral up in Williams Lake and were gone for 6 days.  Again, we returned to the same but the tumbleweeds of dog fur had a few extra days to accumulate.  It was as if the house had flooded but instead of water, it was the knee-high, stinky, entangled hair of both a 14-year-old Golden Retriever and a Bernese Mountain dog, whose hair hangs in the air like asbestos.  We did mention to the kids that a vacuum was needed every second day or so.

The third time takes the cake though.  Every year, we have a family holiday in the interior, to the family cabin.  This year was a bit different.  Normally, we would all travel together and the kids would take friends and we’d disappear into the woods for 2 weeks.  This year, Hugo couldn’t come for the whole time as he’d already taken 2 weeks off work to go traveling. Domenic informed us last minute that he had misunderstood the assignment and was scheduled to work the night we were leaving.  So we rearranged plans, including ferry reservations, and Dom was to stay a few days longer and drive up by himself in my brand new car (literally crossing my fingers and praying that he finds his way and all goes well). Hugo would fly up later and spend the last couple of days with us.  So off we went leaving the boys to the house.  The girls and Kev & I left for the lake.  A few days later, Domenic made it to the cabin.  Upon his arrival, he did mention that he had not stopped for gas where Kev had suggested and so had to make a 40-minute detour to the closest gas station, and luckily the road was downhill and he was able to use that to charge the battery and coast into the gas station like it was planned.  Jeezus.  Hugo then flew up to join us and we were chilling and enjoying the end of our holiday.  Again, last minute, Domenic informs us that he’s been invited to go skydiving for an end-of-the-summer work party BUT…he has to be home a day earlier than planned to make it.  As a side note, for anyone reading this that does not live on Vancouver Island…making last-minute changes to your ferry bookings in August is near impossible.  The ferries are booked up for months in advance and every time you change a booking (which I have already done twice at this point) it costs you.  Not a lot, but it costs you.  So…I find a booking left for the last ferry on Friday night.  We have to rearrange plans because we don’t have enough room in the truck to get everyone, including the aforementioned hairy dogs, home now that the car is leaving a day early.  We decide Hugo will return with Dom, even though he just arrived, and the boys will take the 2 hairy dogs, back with them in my brand new car.  We literally talked about saran-wrapping the dogs to save the car.  Don’t worry, that wasn’t the end solution.  The boys left a day early to get back for skydiving.  They make it to the terminal with no problem…not even a delay in Abbotsford on a Friday afternoon in August, which, again for anyone that doesn’t live here is a miracle!  Their ferry is late and so they get back home at about 1:30 am safe and sound.  At this point it’s probably important to give you a warning…this is going to be gross.  I should also acknowledge that when the boys were leaving the house to come on holidays, I did not make a clear checklist of things to do before you leave a house for a week in the heat of summer: run the dishwasher, empty the compost and garbage, clear your room of any dishes or food.  They did lock the doors!

I got a phone call at 3 am from one of the kids.  He had gotten home and there were bugs in his bed, worms to be precise.  Little brown pupal stage worms, some hatching, some still incubating in their husks.  He was tired and upset and overwhelmed.  He had left his room a mess, had probably been eating all his meals there, watching Netflix while we were gone, and had come home to a whole new ecosystem of creatures.  I advised him to just pull everything out, leave it on the front lawn, vacuum what he could, have a SHOWER, and crawl (no pun intended) into another bed to sleep.  He pulled it off and was in bed by 4:30 am.  Kev, the girls, and I drove home the next day and pulled up to the house around 8 pm.  Rugs, pillows, and bedding were strewn about the deck railings and the outdoor table.  The kitchen was a disaster.  There were loads and loads of laundry being done. The house was pulled apart in order to defend against the invasion of insects.  Empty spray cans of insecticide were laying everywhere, tipped over, and abandoned after what I’m sure was a harrowing evening.  No sign of the kids.  They were with friends at the fair.  I’ll say that one more time for effect.  He was with his friends at the fair.  Oh, and the skydiving…it was delayed for a day and a half due to wind.  I cannot convey the eye-rolling that is going on as I write this.

I finished the laundry, vacuuming, sterilizing my vacuum to make sure nothing was going to hatch out of there, dishes, bathrooms, and more.  I emptied the garbage and compost, which, yes was alive with maggots.  At this point, I am telling Kevin that we are never leaving kids at home alone again.  NEVER.  I went to the dishwasher.  The dishwasher had been run!  Upon opening it, I realized that something had gone wrong.  The dishwasher had been run with no detergent but lots of JetDry.  The glasses were spotless!  However, there was mold growing on the dishes, the racks, and the interior of the tub.  I took one look and thought “OK, time to go y’all.  It’s been fun but I’ve had enough.  Time for all kids to MOVE OUT!”  I ran the dishwasher again with the hopes that the mold would just wash away.  It didn’t.  I washed all the dishes by hand, bleached out the dishwasher, washed each spike of the rack individually, and ended up throwing out my silicone spatulas that had some small cracks in them.  Nothing was getting those clean.  I reassembled the house piece by piece and as all this is happening I start planning what my life is going to look like when they all left home.

So far, the house is quiet.  It is VERY quiet.  Hugo is loving being an only child. He’s barely home between friends, a new relationship, parties, work, and University.  Our roommate is awesome.  He lives downstairs, sleeps in, and then works in the evenings.  Kev and I have eaten dinner together, just the 2 of us, every night this week.  I had a bath that I sat in, watching House of the Dragon and nursing a glass of red wine until the water got cold.  With no interruptions!  No banging on the door, no questions about where to find some favourite hoodie, no shoes stomping up and down the stairs, no loud, offensive rap music!  I don’t think I’ve enjoyed a bath so much in 20 years.  We have taken stuff to the dump, to donation, and given things away.  The house definitely has a different energy to it.  I miss the girl parties that Sophie was having.  She has an awesome group of girls that were hanging out regularly.  I miss Hugo’s friends spontaneously stopping by for dinner, taking our dinners from an already big 7 of us to sometimes 12.  I miss Domenic talking to himself as he figures out various linear algebra or physics proofs in his head or argues chess matches with himself.  I miss Molly greeting the puppies every morning in a very high-pitched doggie voice.  I miss always having companionship (even when I didn’t want it).  But I am thankful for the natural and organic cure to what potentially could have been a painful empty nest experience.   I love the clean house, that stays that way even when I leave.  I love the clean bathtub that’s no longer used as a dirty clothes basket or for beer recycling.  I love the smaller grocery bill.  I am still trying to figure out how many potatoes to cook for 4 people (we have had potato leftovers for days).  I am excited about having time to do stuff like this…write and share about our lives, together and apart with readers like you, who can hopefully relate or see themselves or their future in this post.

I am ready to focus on my health and wellness.  To get to the gym more regularly.  To cook meals with ingredients like mushrooms, that none of the kids like!  To eat vegetarian once or twice a week!  To explore my recipe books again.  To get out on my motorbike more often cuz I only need a 1 seat vehicle!  To remember to take my supplements.  To figure out who the heck I am again after 20 years of child-rearing, not that I’m even done, but something has shifted.  I am excited to have time and space to figure out my next moves.

Can you relate?!  I’d love to hear about your empty nest experience…happy or sad, good or bad.  Or your dread or delight of an impending empty nest!