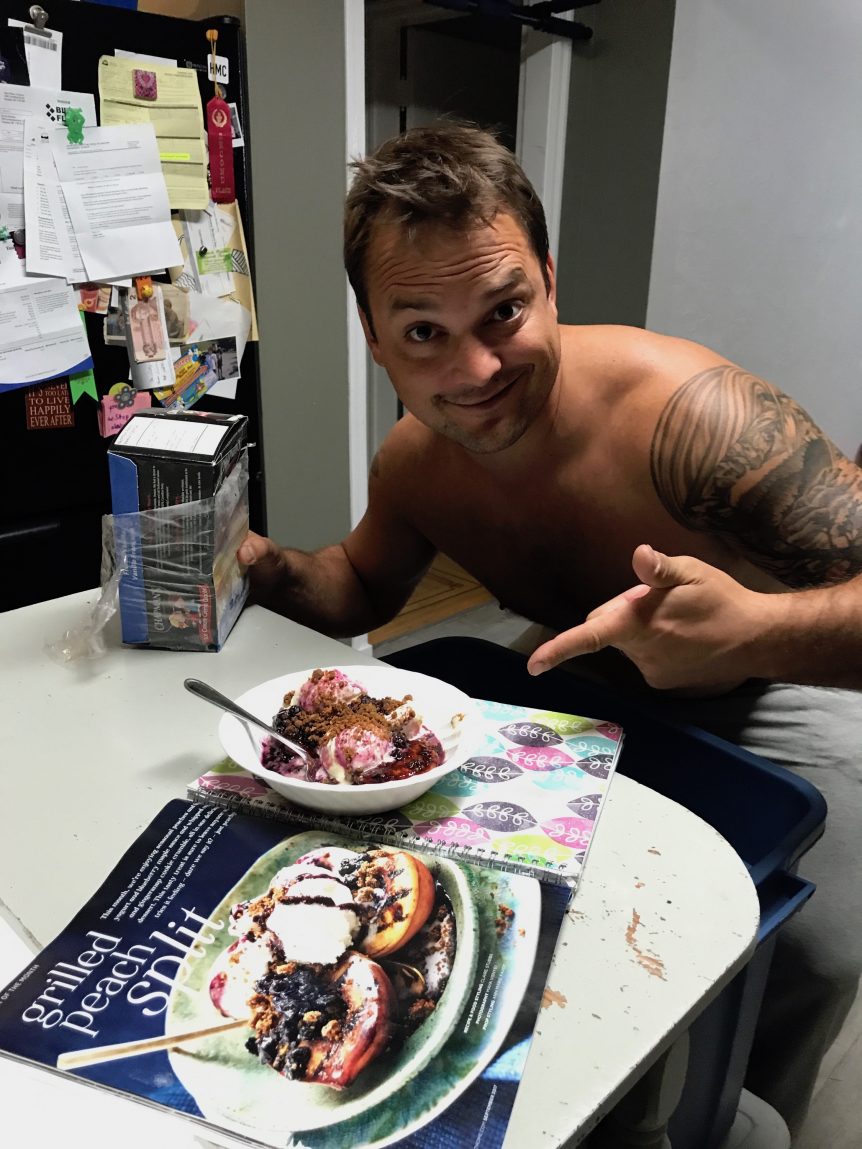 Well here’s the magazine picture and my picture.  Feels like the same experience when I try to replicate something off of Pinterest (sigh).  However it may look, this recipe is perfect for this time of year and is delicious!  It melds seasonal peaches and blueberries…two of my favourites right now.  And it is taste tested and approved by my family, evidenced by the look on Kev’s face.  This recipe was originally published in the September issue of Style at Home magazine. I have adapted it a little bit from there to reduce the added sugar.

I tried to keep the produce as local as I could.  I bought the blueberries at the Bowen Farmer’s Market held at Beban Rec Centre on Wednesdays 4-6pm.  I purchased the peaches at a fruit stand in Port Alberni on the way home from the West Coast.  And I bought the cookies at Country Grocer on Bowen from their bakery section.  They are rich with molasses and deliciously chewy.

To make it, place the blueberries and 2 tbsp maple syrup in a small saucepan and cook over medium heat until the berries pop and the mixture is saucy.  Continue to cook, stirring occasionally, until the sauce is thickened, 15-20 min. Stir in the vanilla extract and sea salt; remove from the heat and set aside to cool.

Heat grill to medium heat.  Halve the peaches, discarding the pits.  Stir together the melted butter, cinnamon and remaining maple syrup in a small bowl.  Brush the peach halves with the cinnamon mixture and place cut side down on the grill.  Cook for about 5 minutes, then turn and cook until the fruit softens and begins to caramelize, another 3-4 minutes.  Remove from the heat and drizzle with remaining cinnamon mixture.

To serve, place two peach halves cut side up in a bowl.  Add a scoop of frozen yogurt; drizzle with the blueberry maple sauce.  Top with a dollop of whipped cream and a handful of crumbled gingersnaps.